‘A View from the Bridge’, set in the America of the 1950s, deals with two themes: obsession and betrayal. Eddie Carbone, a simple longshoreman working present on the piers in the Red Hook district of Brooklyn, and his wife, Beatrice, both of whom are of Italian descent, have brought up their neice, Catherine, now 18 years old. They live under the shadow of Brooklyn Bridge, where each morning the longshoremen huddle in doorways in rain and snow, opposite the piers, waiting for the hiring-boss, around whom they scramble to obtain jobs for the day.

Marco and Rodolpho, Beatrice’s cousins, arrive as illegal immigrants from an Italy where there is great poverty and little work. Their secret arrival triggers off a series of actions that expose Eddie’s dark, complex feelings and lead inevitably, with the force of Greek tragedy, towards tragic self-destruction.

The play, written in 1955, followed Arthur Miller’s successful ‘All My Sons’ (1947), ‘Death of a Salesman’ (1948), and ‘The Crucible’ (1953). Eddie Carbone was first played by Van Heflin, but it was a later performance by the young Robert Duvall that really showed the power of the character. In this country the part was played, in 1956, by Anthony Quayle, and recently, (1987), in a National Theatre production, by Michael Gambon.

The original production in London was banned by the Lord Chamberlain’s office, and the Comedy Theatre had to become a private club in order to present the play. 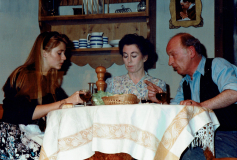 More photos will be added as they become available